Asthma – not just an excuse

Asthma. As a kid, what better excuse to get out of school cross country? You don’t even need to have an attack, just a note! Bring on years of happy, cross country free school days and zero expectations on sports day. I couldn’t have picked a more convenient excuse. Plus, you get to grow out of it, so it’s no bother.

With no symptoms as a young adult (one that smoked too), i wondered if my childhood asthma had actually just been the odd case of hyperventilating, misdiagnosed and used wholly to my advantage.

I was comfortable with that conclusion right up until the age of 28, when i was rather reluctantly talked into giving running a go as a way to lose my post-baby #3 excess weight. Initially I put the constant breathlessness down to too many cigarettes over the past 13 years. I had given up by now but knew it would take a while for my lungs to start functioning better. Several months of training followed, gradually building up my fitness, but at a much slower rate than the friends I had taken up running with.

The first 5k I ever did was a Race for Life run in Bedford in July 2012. I had put some effort into training but was still very unfit. I got around without dying and instantly the running bug bit. I wanted more of this!

Several months of running very short distances went by, each run as hard as the last, lungs refusing to  join the party. I’m not sure why I didn’t think to talk to a doctor at this point. I think I was just so convinced that it was down to the fact that I wasn’t designed to run, it never occurred to me that it might be a medical issue. Until October of the same year – my running friends and I were taking on our first “proper” 5k race. This wasn’t for charity, this was for us because we were now real runners…..well, this real runner got to about 2 miles in and had to stop and walk. And cry. Why the heck couldn’t i breathe? Seriously, i was only trying to run a flat 3 miles. I’d done it before, several times, but in the cold my lungs just said no.

It was after that experience I gave in to my bestie’s nagging and visited the doctors. Turned out it wasn’t because I wasn’t built like a runner that I was struggling, but because i did indeed have asthma. The very thing I had used as an excuse to not exercise was now doing it’s best to stop me all over again – except this time I really didn’t want it too. Life likes it’s ironies.

So that was the initial diagnosis early on in my running journey.  Initially I didn’t think it would be too much of an issue. Asthma is no big deal right?  The doctor gives you inhalers and you feel better and your lungs get stronger with exercise and eventually you forget you’ve even got it. Well no, turns out I got that pretty wrong. It actually took more than 3 years and a change of asthma clinic to find a combination of medicines that keep my asthma at bay enough for me to run without sounding like Sammy the seal and collapsing at the end, completely exhausted and leaving me with chest pain for days after.

I’ve been lucky recently that alot more research has been done into asthma and there are new medicines available out there. Ironically my asthma is exercise induced, but also triggered by hay fever, allergens, temperature changes etc It can still be unpredictable and triggered by new things as yet inexperienced!  I take a great steroid inhaler that worked very well for exercise induced asthma, use a standard reliever when needed, i take a tablet every night to prevent too much mucus production, a steroid nasal spray every night and an antihistamine every morning to try to keep the allergies at bay.

Most of the time this combination works well enough to keep me plodding on although it takes a few weeks with every season change to get used to the new temp/allergens etc.

One thing I learnt early on was that I was never going to be able to run at speed. The drying out of the airways from the excessive breathing irritates the lungs quite quickly. This was one of the reasons I started looking into long distance running quite early on. In fact I’d decided to run an ultra before I had even experienced my first marathon!

Turns out ultra running suits my style. Slower running, walking up hills and eating lots of food. What’s not to love? I’ve had to adapt – summer running has never been great for me as I’m allergic to tree and grass pollen – but 2 seasons of July ultras has hardened me up to it a bit. 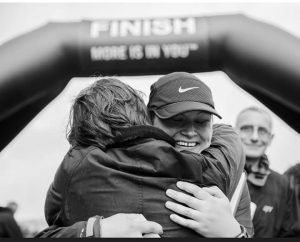 I look for lots of advice and experience from other sufferers and people in the know. I got quite excited last year when one of the regular running magazines advertised that it had a whole piece on how you can still run in the summer with hay fever.  I bought the copy and went straight to the article, just knowing I was about to have the meaning of life revealed to me…..

“….avoid running outside in areas where there is a high probability of coming across pollen….”

I’ve tried several things – a face mask that filters out allergens and makes me look like Hannibal Lecter; smearing odd smelling balm under my nose; refusing to believe I have asthma and not taking my meds.

None of them work.

There have been many runs where I have been reduced to tears, turning the air blue with expletives aimed at my lungs. They function at more than 20% less capacity than they should and sometimes I could really do with that 20%!! A cold can very quickly become a chest infection, which can take quite a long time to recover from and the first few runs post infection always leave me exhausted, frustrated and with a very see chest.

Quite alot of people discover that they have exercise induced asthma when they take up sport as an adult. The best thing you can do is talk to your doctor, keep an open mind and accept the help offered. I resisted the idea of asthma for quite a while, it felt like such a naff excuse. When your muscles stop working because you haven’t got enough oxygen going around your body, you realise that it’s no excuse, it’s a pretty scary reality.

Running with asthma isn’t always fun but it is absolutely possible and should not be used as an excuse not to try.

If I can do it, I promise you that you most definitely can!!