Tina was a non runner just over a year ago. now she’s a marathoner…

My marathon journey started on a slightly damp and dismal day in November 2016. After a  Sunday skills session in Mawsley with the SheCan crew we naturally went for coffee and cake…I was obviously enjoying it too much, as when Kate said she wasn’t doing Brighton marathon in 2017, even though she already had a place, mouth worked before brain, (not unusual!), and I heard a voice saying “I’ll do it if it can be transferred!” And so it began.

It actually took till nearly Christmas for it to be confirmed that Brighton had okayed me to take Kates place – December 13th to be exact.

My training was tough at times…..completely solo until the last couple of sessions, no iPod for company, just me and the trails and roads around Irthlingborough. Thankfully, Katy Hadaway joined me for a couple at the end, which, I now realise, lifted my moral enormously. 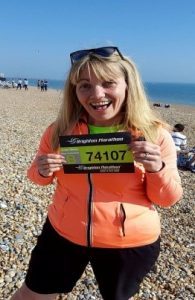 Caught the train to Brighton at lunchtime to pick up my race pack. Kev knows Brighton quite well and we meandered to the seafront through The Lanes so I could calm myself down. So many people! I was also a little nervous of the fact the weather forecast had said highs of 17 degrees for Sunday – I hadn’t planned for that, it is the UK after all. 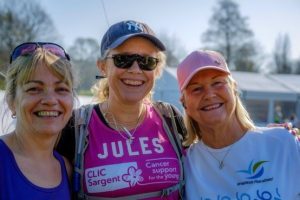 Preston Park. Wow. A sea of glowing, fluorescent lycra and a heady atmosphere filled with anticipation, excitement and nervousness. We quickly forged a pathway through the mass of bodies to the bag drop, and then headed to Green Zone. Thankfully, Julia & Liz were already there which put me much more at ease. I hadn’t realised till then just how nervous I was becoming which, I dare say, was actually a good feeling as I had been relatively calm in the week building up to it. Kev  took a couple of pics of us together, snatched a kiss and a good luck, and left me to it. We were in the corral waiting for about an hour as all the faster runners set off…then it was our turn. Julia and I had decided to see how much we could do together.

We set off at about a 12 – 12.30 pace, all good, turned a corner and….hill!!!  What? We weren’t even a mile in yet! Ah well, “head up, lift your feet, use your arms!” (Wonder where THAT thought came from…). Miles started to pass, we were at ‘chatting’ speed, sun was shining, hand slapping, and loving the cheers from the Brightoners. It was around mile 5 I heard Kev shout my name – it may have been early on, but it felt so good to hear a voice you know and to get a quick hug. 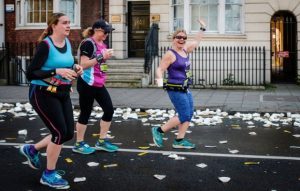 Heading on through the town was lovely, then it was time for the long stretch out, up by the golf course before turning back to the sea front for the first time. This road seemed never ending, but we were jollied along by some complete madman who was recording on his go-pro – he was certainly entertaining! As we turned into a small residential area, people had really started to walk occasionally. We slowed and had our second gel and a few sips of water. There were shouts to move over as an ambulance needed to get through, hope whoever it was for were not suffering too much. It was maybe then that the seriousness of the heat really became apparent. The forecast had been for highs of 17 up until today, but had changed in the morning to the low 20’s. And yes, it was feeling damned hot by now.

Back down the coast road and passing the golf club again, we could see the next water station. Yes!….or maybe not. They’d run out!! What? We weren’t even halfway and there was no water! We both still had supplies with us so carried on but it didn’t bode well. (To be fair to the organisers, I looked back a couple of minutes later and a lorry was dropping off more bottles – but it shouldn’t have completely run out before re-stocking).

It was then that we bumped into Emma, was good to have a chat with someone who sort of knew us. Not long after we also saw the lovely Laura Chambers!  Another hug that just had to be done! 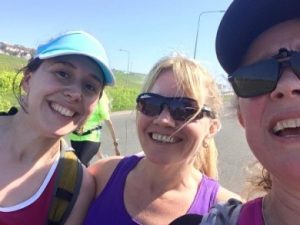 Back through the town and my spirits lifted once more. I was absolutely loving it! I heard my name being screamed again, Kev and my step-daughter Tara were once again in just the right spot. I waved and went to run on but then thought I need another hug – I’m nearly half way and didn’t know if I’d see them again before the end, so I ran back and snatched a kiss and cuddle of them both. I really was so happy. In my own bubble I hadn’t realised my running mate was struggling a little. Julia asked me to carry on without her, but we stuck together for about another half mile until she insisted. She needed the loo and was going to find the next lot. After checking a couple more times that she really did feel ok, no headache etc I did continue.

It was a bit strange for a couple of miles knowing I was now solo, (if being among 12,000 people is solo!), but I muscled on. Back through the town and headed into another residential area, Church Street I think. It was around this point that I noticed an awful lot of people being treated by paramedics. And I mean a lot. Thankfully, the residents had sprinklers aimed at the road and kids with super soakers were doing their utmost to keep us cool. The support was unbelievable. Fresh fruit slices, water, Haribo, jelly babies – even got offered a really cold glass of prosecco (no, I didn’t!).

I was heading back down this residential area on the other side, when I saw Liz and then Julia again. I was so pleased! Especially seeing Julia as it allayed my fears that she had been struggling – she was still going and looked pretty strong! Just before the end of Church Street was the mile 18 marker – not sure if I was happy I’d got that far, or dreaded the thought of another 8 miles……ah well, onwards I go!

Mile 19 passed, mile 20…oh no – the dreaded Power station area. Support was thinning out rapidly, and more water stations hadn’t got any gels or cups, so if they even had water it was a case of cupping it in hands to drink it. I re-filled my bottle at every opportunity and found it sufficient. I’d passed so many people sitting on pavements, heads bent, or St Johns treating people, I wasn’t going to risk anything! I picked up discarded bottles frequently to pour over my wrists to cool myself down – it seemed to be working well for me. The industrial estate, while being a bit of a dead zone, had loads of sprinklers set up to run through, and this did indeed help.

I walked mile 21 and some of 22, chatting to a lovely lady called Debbie about everything and nothing. I recognised from our starting area so at least knew I must be doing ok considering. We started to run again, but she had more in her tank than me and headed forward. Just passed mile 23 and I realised I only had a ‘dog-walk’ left to do! Easy peasy right?! …….WRONG! It was here I had to give myself a good talking to – I even slapped myself round the face! As I’d started to tear up a little. I don’t think it was the dreaded wall…it was more a sense of “I’m going to do this! I’m going to finish a bloody marathon!”  Me, who around 18 months ago smoked 30 a day and easily demolished a bottle or 2 of wine of an evening! But I quickly said to myself that I wasn’t there….yet!

A bit more of a run walk run past the brightly coloured beach huts and I started to get the happy feeling again. The crowds were also building up – yay! The support is invaluable! It’s something you just can’t put into words. More fruit slices and Haribo being dished out – a small gesture but a great boost.

Mile 24 and 25 passed –run, walk, run, repeat. I heard someone say to a lady that was running for Guide dogs for the blind “Come on, you really can do this!” and I egged her on too, “It’s just a small dog walk left love, you can do it!” As I found myself saying this to help her on her way when struggling, it also helped me. The fantastic mile 26 marker came into sight when I heard my name being screamed once more – yep, Kev, Tara and my brother in law, Chris all screaming for me! I gave a royal wave as I carried on past them! I was doing this! 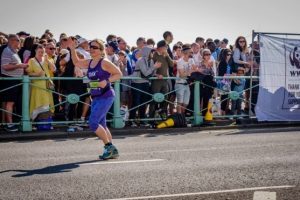 That last 0.2 of a mile was never ending though! And then I saw the official photographers lining both sides of the road, I could even hear the shutters going off as they snapped away…and the black rubber matting suddenly seemed to be zooming towards me….6 steps, 5, 4, 3, OMG! 2, 1, YES!!!!

The rest is a bit of a blur….I’d done it!  50 days before my 50th birthday, I’d completed a marathon! I am a marathoner! I’m menopausal, still slightly overweight, but I can run a marathon! 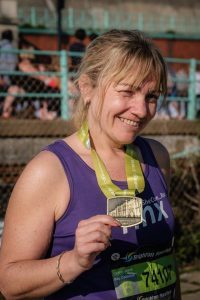 And I’m bloody well proud of myself!

Would I do another? Hell, yes! I thoroughly enjoyed the whole thing! Even the sobbing uncontrollably when I did eventually find my family nearly an hour later!

You should at least try it – at least once. You know you can…. I can! SheCan!