When things have to change…

Being in pain makes you miserable. Fact.

Actually, I don’t think that comes as any surprise to anyone apart from me. I’ve had joint pain for nearly 25 years now but only recently been diagnosed with Rheumatoid Arthritis and treated with disease modifying drugs. For the 6 years before that I lived on heavy duty NSAIDs and before that on anti depressants as I was misdiagnosed.

My first attempt at running – race for life

I started running in my 30s, as a way to lose weight. The dodgy ankle was very much present even back then and the lower back pain was usually there reminding me of my extra 4 stone that I tried to limp around with me. I lost weight but the pain continued. I don’t know what it was back then, I suppose it was the fire in my belly that drove me on through the pain and through several marathons.
It’s different now. The last couple of years the game changed. The pain was still there; a mix of throbbing bones keeping me from sleeping and muscles so tight and sore that I struggled to stand in the mornings. The pain didn’t change. But something deep inside my being asked me to stop and re-evaluate what I was doing.

So I did, for a minute. And then decided to sign up for one more half marathon.

As you do.I trained through the summer, I would even say that with the help of Methotrexate I relatively sailed through 6,7,8 and 9 mile long runs. As the season started to change, my last long run felt more uncomfortable and left me feeling flu like for days. It was a timely reminder of what my body had asked months before- stop and re-evaluate.
So I ran the Royal Parks Half.
It was harsh, right from the start. Sometimes it takes me 4 miles to warm up, so I held on to that. 4 miles passed and I still felt out of sync. 5,6,7 miles. “This is flipping ridiculous” I thought “I shouldn’t be doing this”. I then passed a man who had fallen and who was receiving CPR. I can’t put in to words what that did. Suddenly I just wanted my family. I wanted to stop this stupid race, a race I knew I shouldn’t be doing because my body had already done so much for me. I was tearful and emotionally drained.
I saw my husband just a few minutes later and cut across the runners to grab a cuddle. He told me to hang on, to get round however I could and to keep smiling. He gave me renewed hope that I still had enough fight in me to finish what I’d started. To do my last half and to get that medal.
I walked most of the last 3 miles, tears in my eyes, praying that the man I’d seen would be ok. I later learned that he died. It shook me to my core. Long distances are not to be messed with. It had become so easy for me to say ‘oh it’s only a half’. It’s 13.1 flipping miles! 13.1! It’s a long way and it puts our bodies under a lot of stress. It’s no time to be a hero if you’re not in a fit state to finish. For the first time ever, I considered myself so lucky to have finished. 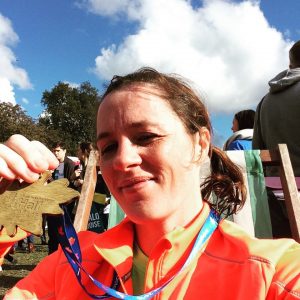 That race has played over and over in my mind ever since. I have begun to realise that I don’t need to prove anything to anyone (including myself). I just need to be here for my family and friends. I can’t lie, it’s going to be tough not putting the miles in with my friends, eating what I like because I’m running 30+ miles a week and enjoying the post marathon buzz. It’s easy to get caught up in the marathon excitement, especially when the London Marathon ballot results are first out and when fellow runners start upping their miles in the spring. It would be easy to sit and wallow in self pity that I can’t and never will be able to run another marathon. But I’m refusing to allow myself to think that way. There must be something else, I suppose the next challenge is finding it.
At least with no marathon to train for, It gives me time to re-evaluate. On to new things and new challenges. I’m often asked (usually by non-runners) why I run when it hurts so much and makes me feel so poorly. Truth is, I don’t like it much. But what I do love is the running community and in particular the SheCan… tribe. It’s not just about running, that is such a small part of it. It’s about sharing good times and sad times, running off the angst, building self confidence, self worth and resilience. It’s about cake, diet coke and really grim gels. It’s about having a group of people around you who know why you run stupid miles, in stupid weather and understand that when you can’t run it’s the worst feeling in the world.
As we approach the peak of the spring long distance race season, I am choosing to reflect on how many miles I have run, not how many miles I’ve missed out  on because I have the body of an old lady. It’s about choosing to see the positives, not wallow in the could have beens.
I may be down but not out. Not yet.